The felt is made of natural wool or long fibers such as recycled cotton, fiber, cotton, etc., with a Ring Woven Press Felt Loom or other shape cross section, and a thorn with a hook on the edge repeatedly punctures the web. The web that is driven by the cross-web or the air-laid machine is very fluffy when fed into the needle-punching machine. It only has a certain strength due to the cohesion between the fibers and the fibers, but the strength is very poor. When a needle is inserted into the fiber web, the barbs on the needle will drive the fibers on the surface of the web and the subsurface, and move from the plane direction of the web to the vertical direction of the web, causing the fibers to shift up and down, resulting in up and down shifting. The fibers are pressed against the web to compress the fibers in the web.

When the lancet reaches a certain depth, the lancet in Heavy Duty Ring Woven Press Felt Loom begins to rise. Due to the slanting of the spur hook, the displaced fiber is released from the spur hook and remains in the web in a nearly sag state, as many fiber bundles "pins" are nailed into it. The web, so that the compression produced by the web can not be recovered. If dozens or hundreds of repeated punctures are made on the web per square centimeter, a considerable amount of fiber bundles are penetrated into the web, and the fibers and fibers in the web The friction between the fibers is increased, the strength of the web is increased, and the density is increased. The web forms a nonwoven having a certain strength, density, elasticity and the like. 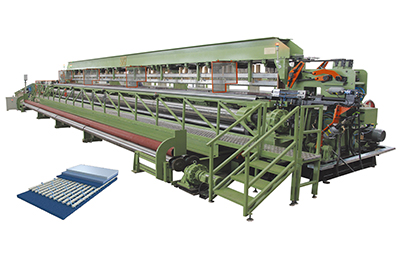 Next Do You Know The Characteristics Of Papermaking Blankets?